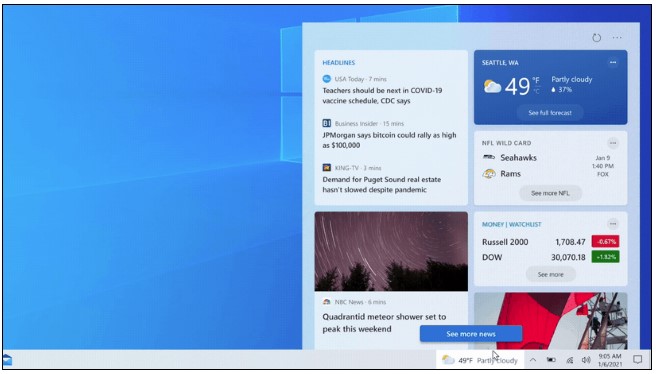 Microsoft released a Windows Insider update in January that made significant updates to the taskbar. A new weather readout was added next to the machine tray, which when hovered over revealed a new panel with more accurate weather updates and reports from different news outlets.

With months of testing, it appears that these taskbar upgrades are ready for prime time, as Microsoft has begun to phase them out on a larger scale.

If you see news of this Windows Insider upgrade in January â€“ or even engaged in the Insider rollout â€“ you probably have a clear idea of how this works and Microsoft doesn’t appear to have made any major changes.

The idea, it seems, is to encourage Windows 10 users to keep up to date on current events without having to immerse themselves in them.

When you hover your mouse over the weather details in the task bar, a screen will appear with a variety of columns, each with a headline. You can open the entire story by clicking on one of those panels for a “streamlined reading experience,” or you can save or post the story and come back to it later.

When it comes to which information cards appear in the screen, you can even customise it. You can choose from a variety of subjects, as well as your favourite publishers and even tell Microsoft which news stories you’d be more likely to hear, to help adapt the add-on to your preferences.

If you don’t care about this screen, on the other hand, Microsoft says you should turn it off.

While the News and Interests panel on the taskbar is starting to roll out today, it will take a while before it shows up on the desktop; Microsoft claims it’s taking a “phased and calculated approach” to the rollout, so while some users will see it in the coming weeks, it’ll be a few months before it’s widely accessible.