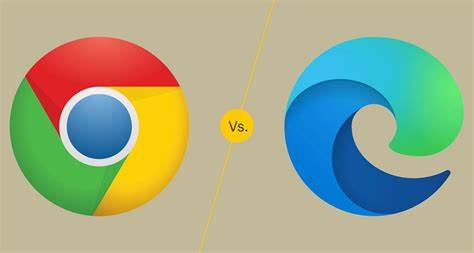 There are a lot of promotion about Microsoft Edge now days, I come across articles that, for one reason or another, advise the reader to “ditch Google Chrome in favor of Microsoft Edge.” Many new and upcoming Edge features are frequently mentioned in these posts, as is the fact that Edge is now developed with Chromium â€“ the same browser source code as Google Chrome.

To ensure that my evaluation of Microsoft Chromium Edge was fully objective, I spent this week using it exclusively on my Windows 10 PC. Yes, you read that correctly: a Chromebook enthusiast turned to Edge and used a Windows machine! Not only that, but I’ve switched from Google to Bing for web searches *gasp*! I searched as deep as I could using only Microsoft apps and services, attempting to create my entire workflow around them.

For this experiment, I essentially de-Googled myself. One of my first thoughts was that I really liked Edge’s vertical tabs functionality.

They are, in reality, the future of how we can manage and access the internet, in my opinion. Google tried this years ago in the form of side tabs,’ and we even wrote about it! I couldn’t live without Chrome’s Tab Groups feature, so I allowed it via edge:/flags and reveled in the potent combination of Tab Groups, Vertical Tabs, and Edge’s exciting Collections feature.

I assume that, thanks to its latest Side Panel functionality, Chrome will soon be able to collapse tab groups into the Reading List, so fans do not have to wait long to use this same method directly in Google’s ow.

The new Tab Scrolling and button creation seem to argue against this, but they are attempting to find ways to alleviate the horizontal space problem, so I believe that the natural evolution of these tools will inevitably follow Edge’s transition to vertical tabs.

Edge Collections are not the same as Google’s Collections functionality, but they may be in the future thanks to Assistant Memory.

Instead, they allow you to group browser tabs into distinct named containers for later retrieval.

With such a feature, I felt like my ability to switch between devices while retaining my browsing sessions would be more complete.

Oh, and the option to add sticky notes in the Collections section was a thoughtful addition as well.

The Web Capture tool is another feature of Edge that I really like. I can see how being able to quickly take a screenshot of the web without the need for any third-party software could be very useful, Especially because it means your native tools and shortcodes are inconsistent across multi-device devices with different operating systems.

Lastly, a built-in share button is available on the Edge browser! It is how Chrome doesn’t have this, and how it makes no sense that I’ve been moaning for years. I mean, it’s 2021 â€“ sharing is at the heart of our interactions so it’s a little bit goofy to have to manually copy and paste links on a desktop or laptop browser.

Chrome OS sharing sheet has been built into Shared Hubs and can be seen on Chromebooks in the near future, but I haven’t seen much evidence that comes to Windows, MacOS, and Chrome’s Linux Desktop.

Articles read it prominently later and were well crafted, but even after I have agreed with my suggestions in order to make them more technologically focused the service was overcome by showing me news about tragic events.

I’m not a Google News fan, but I’d like to see irritating policy about death and devastation â€“ although some may say it’s synonymous.

I’m going to save my thoughts about the environment of the Microsoft app for yet another time, but when I finish my little experiment, I won’t suggest you should use one over another, but for a variety of reasons I ended up going back to Google Chrome.

First, Chromium Edge kept freezing and crashing at me. I have spent several hours trying to address technical solutions, such as disabling Proxy functionality in the browser, forcing them to exit via Task Manager, etc., but could not find a Microsoft browser that fits well with a Microsoft machine weird.

Unlike 5 years ago, Chrome doesn’t seem to be the source of wealth it used to be, due to its continuing AI discovery AI and machine learning tricks such as Partition Alloc â€“ it was snappy and smooth even with hundreds of taps open, uncollapsed or frozen.

I used the Windows search feature, which opened queries in Bing, because I really wanted my Windows computer to have immediate access to web searching without the need to open a new Edge tab (once you have a Chromebook, you can’t miss out on this!).

Bing had a professional interface, the ability to add videos to playlists and play them directly in quest, and other features.

Unfortunately, with all of the ads you’ve ever Scroogled, Bing search results were admittedly pretty lousy as compared to Google. I discovered that the information returned was less important not only in terms of answering the questions I was asking, but also in terms of content type.

In the end, I discovered that adding Chrometana Pro to my Chrome browser and following its instructions to instal Edge Deflector enabled me to use Windows search to open search results in Chrome, despite Microsoft’s efforts over the years to prevent this from happening.

About security, which is frequently discussed in the aforementioned “ditch Chrome” posts. Security will be a problem regardless of which organization you select â€“ benefit directly opposes privacy, and this is a natural rule. Google has done a lot to demonstrate that it cares for consumer privacy, but it has also done a lot to weaken its efforts over the years.

Google, like Theseus’ ship, is no longer an actual ship, but the concept of a ship â€“ it can’t be destroyed, but it also can’t be described, and as a result, it can’t function in complete synchronisation with all of its moving parts. I’m not knocking that; it’s the reality of its life, and if we want to use Google Serv, we have to embrace it.

Users should be more concerned with their privacy than corporations are, and they should take appropriate precautions to protect themselves by being and remaining regularly informed about current events and business decisions being taken around the board.

On a scale, privacy and comfort are inversely proportional; the more of one you have, the less of the other you have. That’s how it’s always been, if you think about it.

Take the same idea and extend it to several generations. Our current reliance on big tech is a direct consequence of this, and there is nothing inherently wrong with it.

Big tech companies like Google and Microsoft may appear to be faceless, darkened heads on a screen, but the truth is that they are made up of human beings just like us who are trying to leave their mark on the world in a meaningful way by creating something awesome and innovating to solve a problem while feeding their families and keeping the lights on.

Â If you’re talented enough, you might theoretically programme most of what Google provides, but I’m sure you’d rather go out and experience life, take pictures, spend time with your family, and work in your preferred industry. I might not like how much the shoe manufacturer charges for my shoes, but instead of making my own shoes, Iâ€™ll probably just switch brands.

In this regard, Google has made its fair share of errors, and I definitely don’t blame people for writing “ditch Chrome” posts.

However, let us not forget that Microsoft has had its own ups and downs as a mega-corporation for over 20 years, and as a result, many people have encouraged others to turn away from the business in favour of other goods and services. Indeed, Microsoft’s slow, complicated operating system, as well as privacy issues, are major reasons why Chrome and Chromebooks have become so popular in recent years.

I assume that when an organization takes action that is detrimental to others, certain individuals automatically move to the opposite end of the continuum. As a result, they lose out all of the advantages of the outcome just because of understandably.